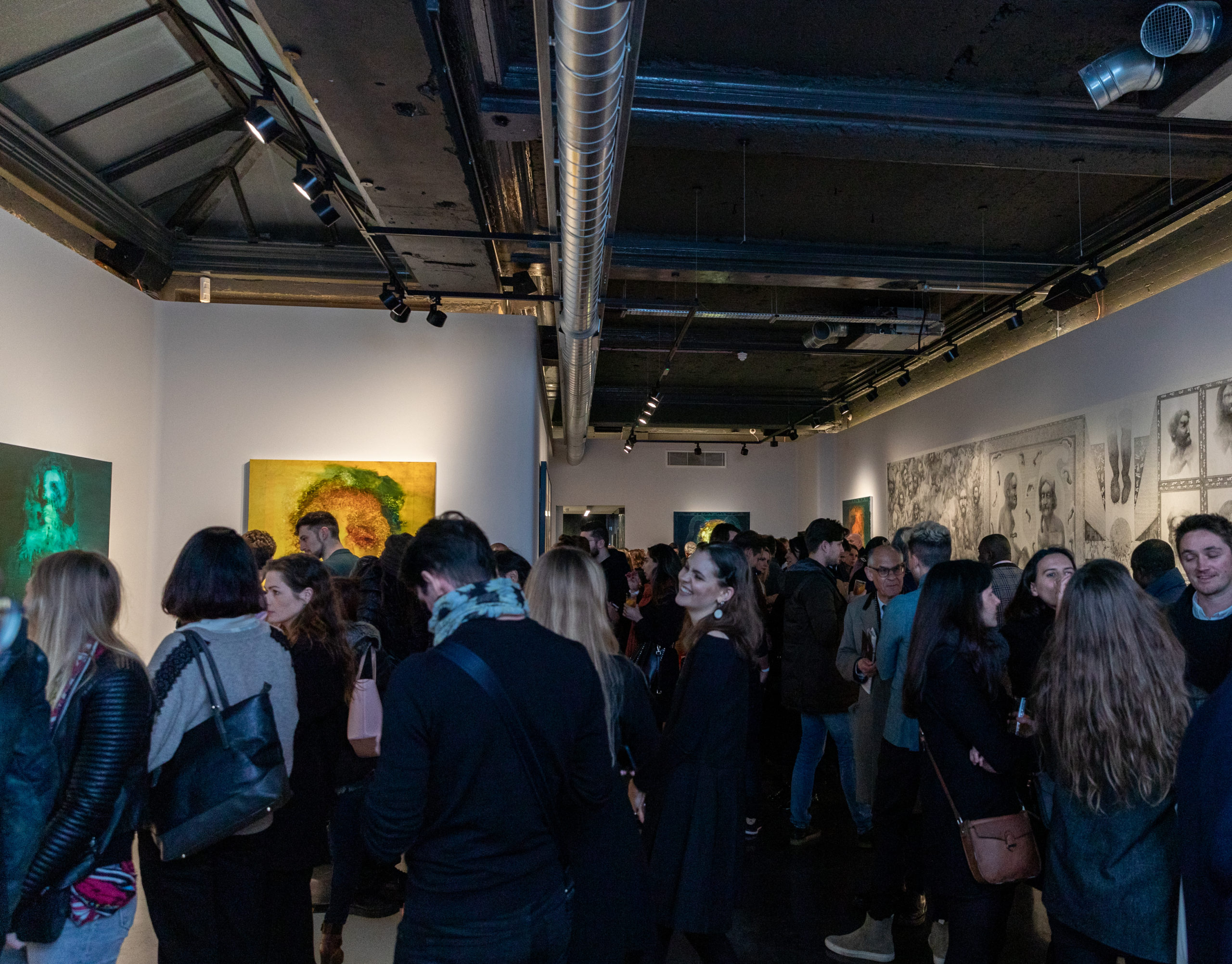 Johan Van Mullem returns for his second solo show at Unit London, Reverence. Curated by major art collector Christian Levett, Reverence showcases a series of mesmerising canvases which attempt to reconstruct the soul and essence of man. Although his works are not strictly self-portraits, they do reflect his purest desires, thoughts, and feelings.

Influenced by the Aristotelian ideology, that ‘the soul is the form or essence of any living thing, and not a distinct entity separate from the body’, Van Mullem’s figures appear as if they are turned inside outpouring their innermost feelings on to the canvas. Van Mullem’s ability to capture these provocative and haunting qualities link his work to the portraits of Francis Bacon, Francisco Goya and Johannes Vermeer.

Guests queuing for the Private View

The aesthetic of African masks in Van Mullem’s practice stems from the artist’s formative years spent in the Congo. The idea of the mask as a symbol of protection or disguise is hinted at in Van Mullem’s expressionistic and obscured portraits, which are sculpted to reveal the dynamism of the spirit beyond.

The Private View, which took place on Wednesday 03 April,  was an emotive and celebratory occasion, perfectly complementing the atmosphere created in Johan Van Mullem’s works. The event was attended by over 700 guests, who filled the gallery space with stimulating conversation while admiring Van Mullem’s latest works and enjoying delicious Whiskey cocktails provided by The Macallan.

Reverence is on show at Unit London Mayfair until 13 April 2019.

The images from the evening are accessible here.

An evening enjoyed with…

Double Dutch’s twin founders, Joyce and Raissa de Haas, have a natural affinity for superlative drinks and excellent blending. While the world’s choice of spirits has continued to grow, mixers and sodas have remained bland, but Double Dutch has developed flavour pairing techniques in order to create innovative drinks designed to compliment, enliven and enhance spirits. Offering a premium selection of revolutionary mixers which use only natural ingredients, Double Dutch blend them with the highest quality water from the North of England to create crisp and fresh mixers for refined palates.