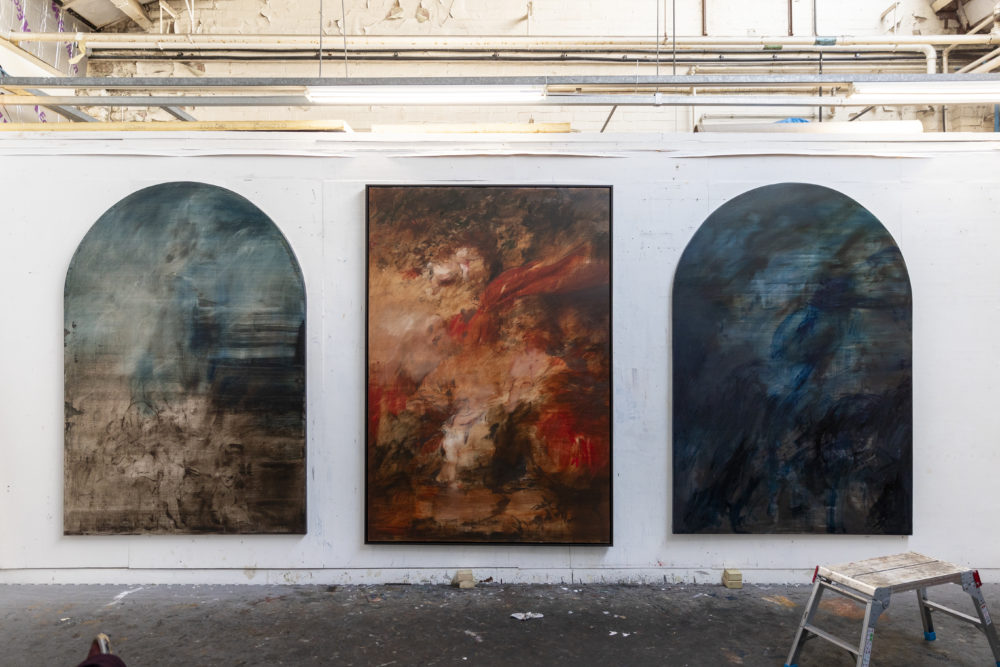 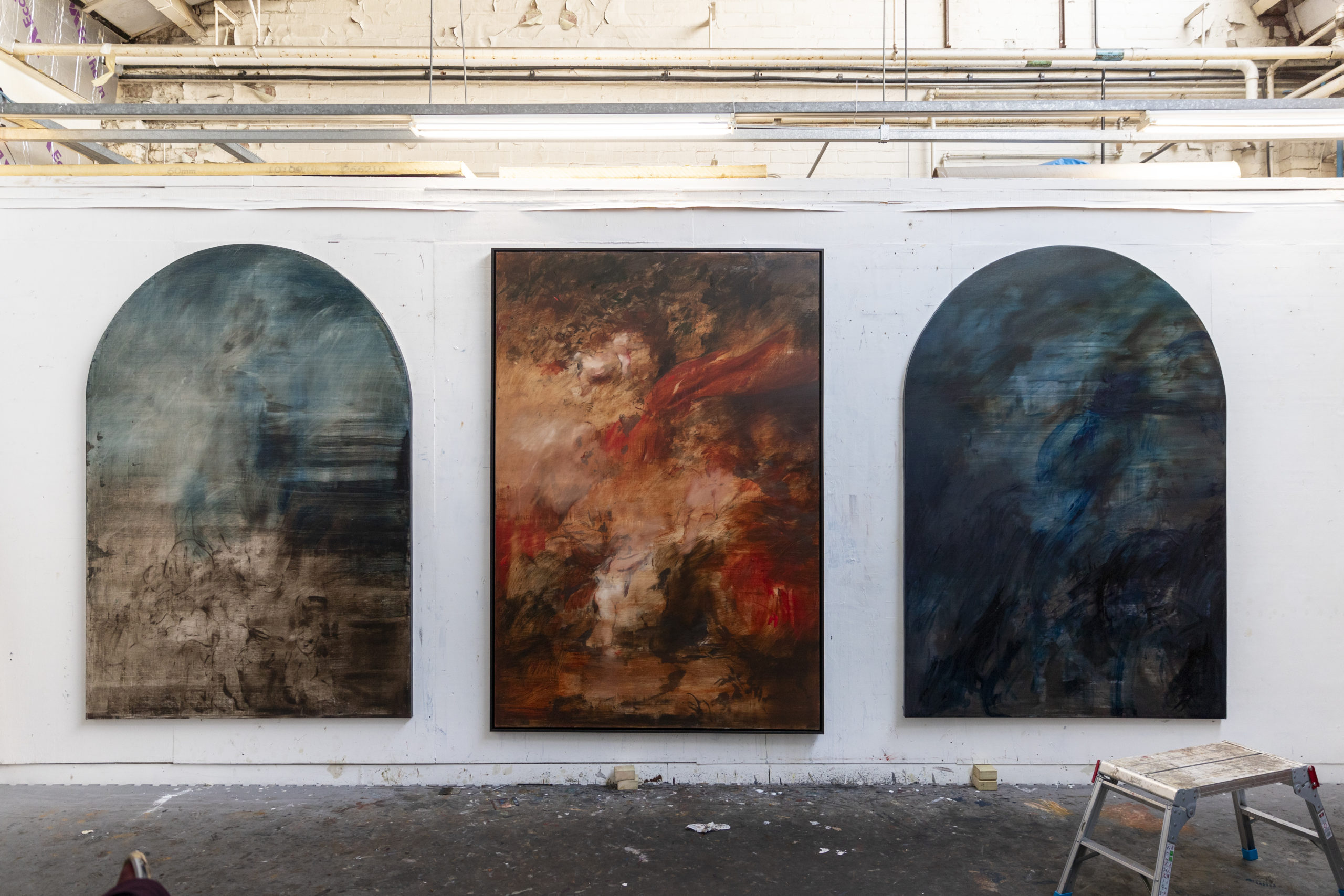 In Conversation with Jake Wood-Evans

Jake Wood-Evans‘ work has always belied his rather ruminative nature: the paintings are imbued with a kind of wistful melancholy which Wood-Evans describes and explains in an ordered and meditative way. Sitting down with Jake is a rather theraputic process, you feel the world outside his studio melting away as a measured, unpretentious explanation of mental and physical artistic processes is neatly unpacked before you.

Study For the Assumption, With Oxide Red, 2019

UL Should we start by talking about the references used in Relic? What drew you to them and how did you selected them?

JWE I’ve always had a fascination with the Baroque, and the sort of move away from the eighteenth century art is something that’s kind of been ongoing in my studio. I’ve been developing ideas with it really. This group of paintings is really about stripping away, there’s so much to work with in those large altar pieces that it’s hard not to be inspired.

UL These works are concerned with a kind of layered abstraction?

JWE Yeah, I’m sort of interested in the layers and taking layers away, deducting, almost leaving myself, leaving the canvas with a trace of what was there before. Or, you know, the sort of initial structure of the painting – I’m referencing that then just, you know, seeing where I can take that.

UL Are you looking at any contemporary abstract painters that are informing that side of the work?

JWE Yeah, I mean, I’ve been looking at Rothko and am kind of obsessed by those sort of meditative paintings, they’re almost like diluted emotions. There’s a kind of distilled emotion in them. The minimalism almost adds to the intensity of the emotion.

JWE Yeah I guess the less you can see the reference the more the paintings are about me, but the movement in the reference informs my process: in Relic I had a lot more freedom with the mark-making, that’s certainly more of what I’m interested in coming out. There’s also something about the shape of the canvases that straight away makes you think about altar pieces and religious art. Taking the work to a place of abstraction allows me to be more free and, you know, experimental with the painting.

UL You talk about bolder brush strokes and bolder mark making, do you feel like you have to take more risk with this approach? Is there a certain mindset you need to get into to do this effectively?

JWE I think if you’re not taking risks in your painting you’re not really finding out new things. I’ve always done that with my work. I think even in the smallest marks, when you’re rendering anything, the mark you make is a risk and that risk gets greater the more time you spend on the piece. You get to a point where you don’t want to mess it up, necessarily. But you can’t paint like that every time, it’s just too contained. I think the whole process can be a negative or a positive, it depends. I like to take risk and just see what happens, it may all get wiped away. These paintings are a bit freer, I’ve kind of marked them out and, once they’re there, I’ve just started playing with them and there’s less risk there, to an extent, but definitely more freedom. In some ways it’s exciting, but yeah it’s been nice to just be quite instantaneous.

UL You’ve got this graveyard of paintings over here, what are those?

JWE It’s just unfinished work, the process hasn’t been concluded, I haven’t worked it out yet. All of it’s a kind of exploration, trying to work things out and seeing if different things work, not everything is successful. Occasionally you hit on something that is, that’s how this work came together it kind of came from playing around.

UL So in regards to Relic did you get a clear sense of when each piece was finished?

JWE Yeah they were kind of mostly done in a few days really. I think as soon as I hit on a kind of balance or harmony within the painting I kind of tried to settle on it, I just sit with it for a bit, leave it in the studio and see how I feel about it a few days later.

UL They look like a long exposure negative or maybe a restitution scan.

JWE Yeah that kind of trace, something that was there but is now absent or it’s been faded over time is the idea of the show, the idea of Relic: almost how the paintings could look in the future potentially, or seeing the layer underneath that, almost like an x-ray. Transparent layers being removed and added in this kind of conversation with the past.

UL How does the continuation of past technique affect the work today?

JWE It’s always been about adding and removing and decision making and this, I guess, probably feels more extreme in some ways because I guess there are larger areas being wiped off and scraped into, I think you can kind of see the underneath of the painting is sort of being washed away

UL Does it make you feel more vulnerable as an artist, this push into deeper abstraction?

JWE Yeah on some levels, I’m not scared if it ends as a blank canvas, I’m not scared of that process, I’m quite interested I’m going on that journey with the painting. Whether that is something I want to display or not is different (laughs). I think normally the interesting bit happens before you get to that point and the key can be spotting that when it occurs.

UL Does it happen fairly often that you take too much away?

JWE Yeah all the time. I’ve learnt that trying to finish things, fussing around, trying to make things right, is often a destructive process. It’s trying to spot those accidents and leave it. The marks have to have conviction. I think if you’re too worried about getting things wrong they can become contrived and lose what you were trying to do.

UL You can’t be hesitant with them.

JWE No I don’t think so, you just have to go with them and learn how to not worry about things, like losing the top section of the painting.

UL Does that come naturally to you? Not to worry, not to fuss.

JWE It didn’t use to, but my paintings were quite traditional, I was quite into the craft of painting early on, I spent a lot of time learning to paint, how to portray skin and eyes or whatever and now I’m finding myself at a point where I’ve almost abandoned that. But I’m hoping that all that knowledge does sort of shine through in that kind of quite minimalist canvas, I’m hoping it’s still there.

Study For the Empire of Flora, After Poussin, 2019

UL Despite these developments, is there still an element of going back to beginnings? You painted Baroque figures when you studied in Madrid.

JWE When I was in Madrid I was fascinated for a long time by the Baroque. Then when I came back I focused in on what was around me and started working from British artists and studying their work. But recently, the more I looked into abstraction, the more I saw the altar pieces as ideal canvases for abstract painting: the flow and the rhythm of them is perfect. Then I got these canvases made.

JWE Yeah they started as flows of colour, but there was too much going on when I was using all the colours so I tried to strip it down to one or two, one of those big decisions is what colour stands out from the reference, what to go with. I’m kind of also looking at the structural marks and shapes and seeing the rhythm of that. The bare bones of those paintings, flattening everything out and just seeing the kind of structure of them. I wanted the bottom of the paintings to have that weight and structure and then as you move up that kind of thins out and becomes more minimal

UL Is this still a passion and a love or has it just become work?

JWE I don’t know. I’m kind of obsessed by it, I can’t not do it, but it’s quite good that it’s a job, I try to structure it really, otherwise it’s too much on the family. The waters get muddied when money comes into it, because then you have to start thinking about that, as you can see by these paintings I’m not necessarily worried about the capital. For me it’s not about building a brand, it’s not for the money drive, it’s the enjoyment of exploring and kind of being creative really, the creative thing is the important thing, the rest of it can kind of be a distraction after a while. And not being scared to go in different directions. I just don’t want to be one of those artists who does the same paintings for the rest of his life.