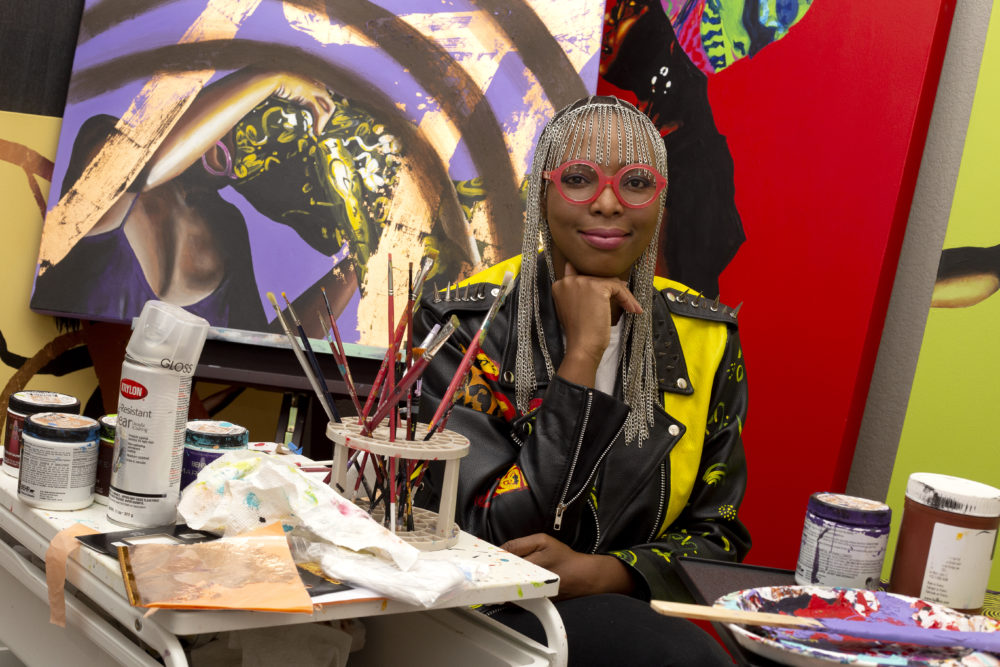 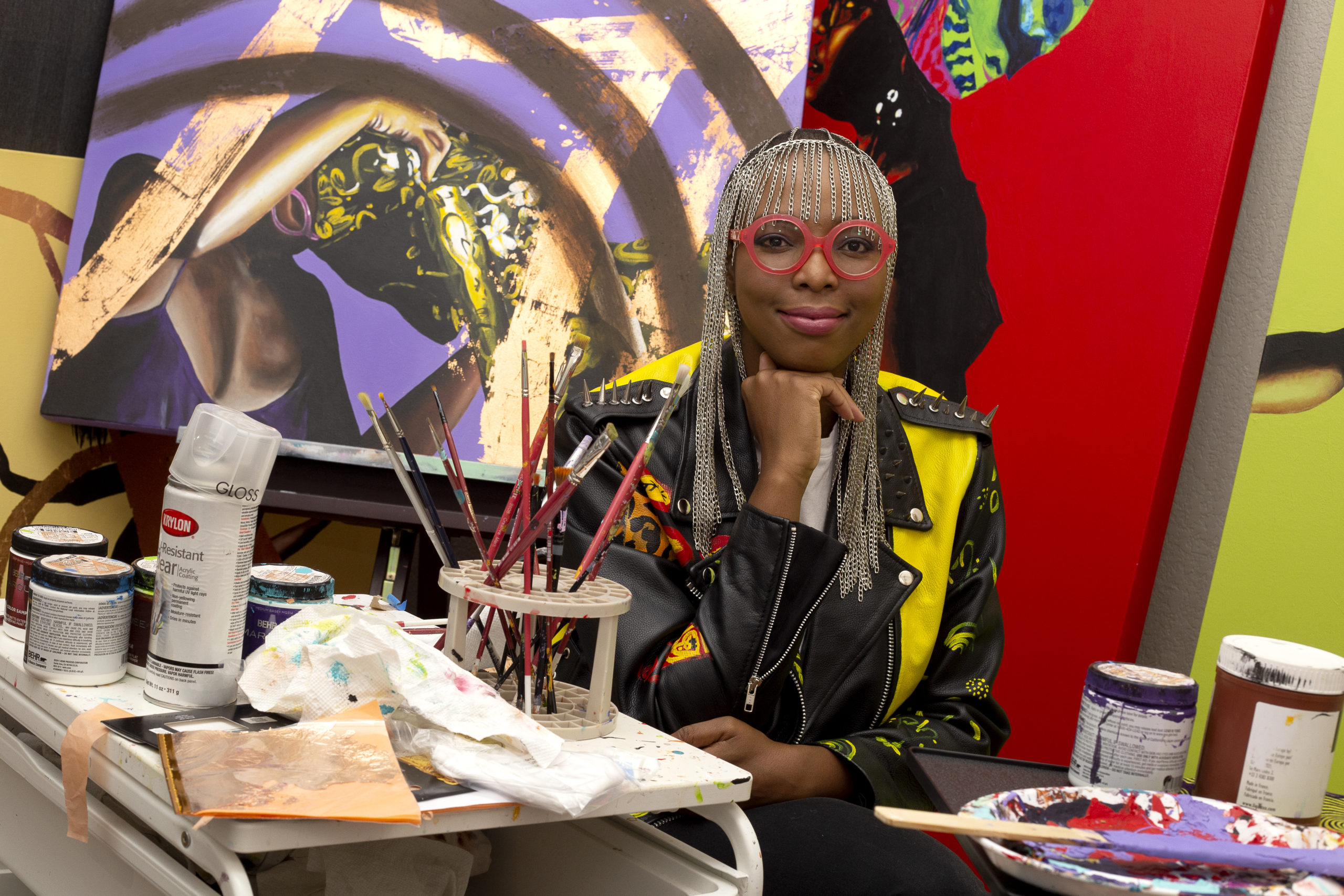 Dawn Okoro’s practice began with her interest in fashion illustration, photography, and design. She is a painter, fashion designer, and videographer whose works feature dynamic female figures against gold backdrops. She received her bachelor’s degree in psychology with a minor in fashion design from the University of Texas at Austin, and her Juris Doctor degree from Thurgood Marshall School of Law. Okoro’s solo exhibition Punk Noir launched in Austin, Texas, in 2018 and toured through March 2020. Her work has been featured in Architectural Digest, Hyperallergic, Forbes, Artsy, Drawing Magazine, and on BET’s The First Wives Club.

UL Could you talk us through your materials and creative process, from the first stage to the finished piece?

DO After I decide who I am going to paint, I have the model come to my studio so that I can shoot reference photos. Sometimes I decide ahead of time what the model will wear. Other times I tell the model to wear whatever they want. I occasionally use existing photos as reference images.

Once I have my reference photos, I make decisions on the colour scheme and begin painting. Most of my paintings are done with acrylic paint. I like how acrylic paints are water-based and allow me to paint layer-after-layer without waiting on long drying times. I sometimes use a copper or gold leaf on my paintings to obscure parts of the figure. The shiny metal leaf is a way for me to push back against certain things. This use of metal leaf is also how I express the feeling invisibility or erasure.

UL What draws you to the imitation gold leaf that forms the backdrop for your figures?

DO I began using a lot of imitation gold leaf in my Deconstructed Vixens series. It is a set of paintings that look at how Black and Brown women have been portrayed in popular culture. The series features women who have posed for my art and women who were video models in the ‘80s, ‘90s, and 2000s. Video vixens are a staple of American hip hop culture. In the videos I watched as a kid, women were usually shown in submissive roles while their male artist counter parts were in positions of power.

In my work, I am extracting the vixen from the video and showing her in a different context. I am trying to highlight a different narrative. Gold leaf dates back to ancient Egypt, and it was held sacred. Since in music videos, vixens are often stripped of their value beyond their bodies, I wanted to surround them in gold. So while parts of the women are obscured, they are still held sacred.

UL Your work seems to be about motion and the joy of movement, is this a fair assessment?

DO I like to show different parts of life in my work. While in some pieces I am reconceptualizing a part of popular culture, in other pieces I am simply letting the canvas be a space for a black person to just be. Through my series Punk Noir, I present black people in joyous, proud, and even quiet moments.

UL It also seems to be about the age-old artistic trope of ‘taking away’, of stripping back. What is the thinking behind the subtraction, the partial obscurement of the figures?

UL Do you think your work still interacts with your interest in fashion illustration, photography and design. If so, where does this overlap aesthetically?

DO A lot of the poses the subjects do in my paintings are inspired by old fashioned ads. I employ techniques used in fashion photography to create an eye-catching piece to draw in the viewer. Through much of my work I highlight the fashion that the subject is wearing, because it tells a part of their story. I have also used fashion as a medium, by painting on the clothes directly and creating wearable art.

UL After The Medium is the Message what is next for you in terms of shows? Do you see the style or subject of the work itself changing in the near future?

DO I am excited to show at Northern Southern Gallery in Austin, Texas and Rice University in Houston, Texas. Since we are in quarantine, one challenge I have run into is difficulty in shooting models. I am now experimenting with remote photos shoots to create new reference images.

Power, The Way You Move, Portrait of Ki Toy