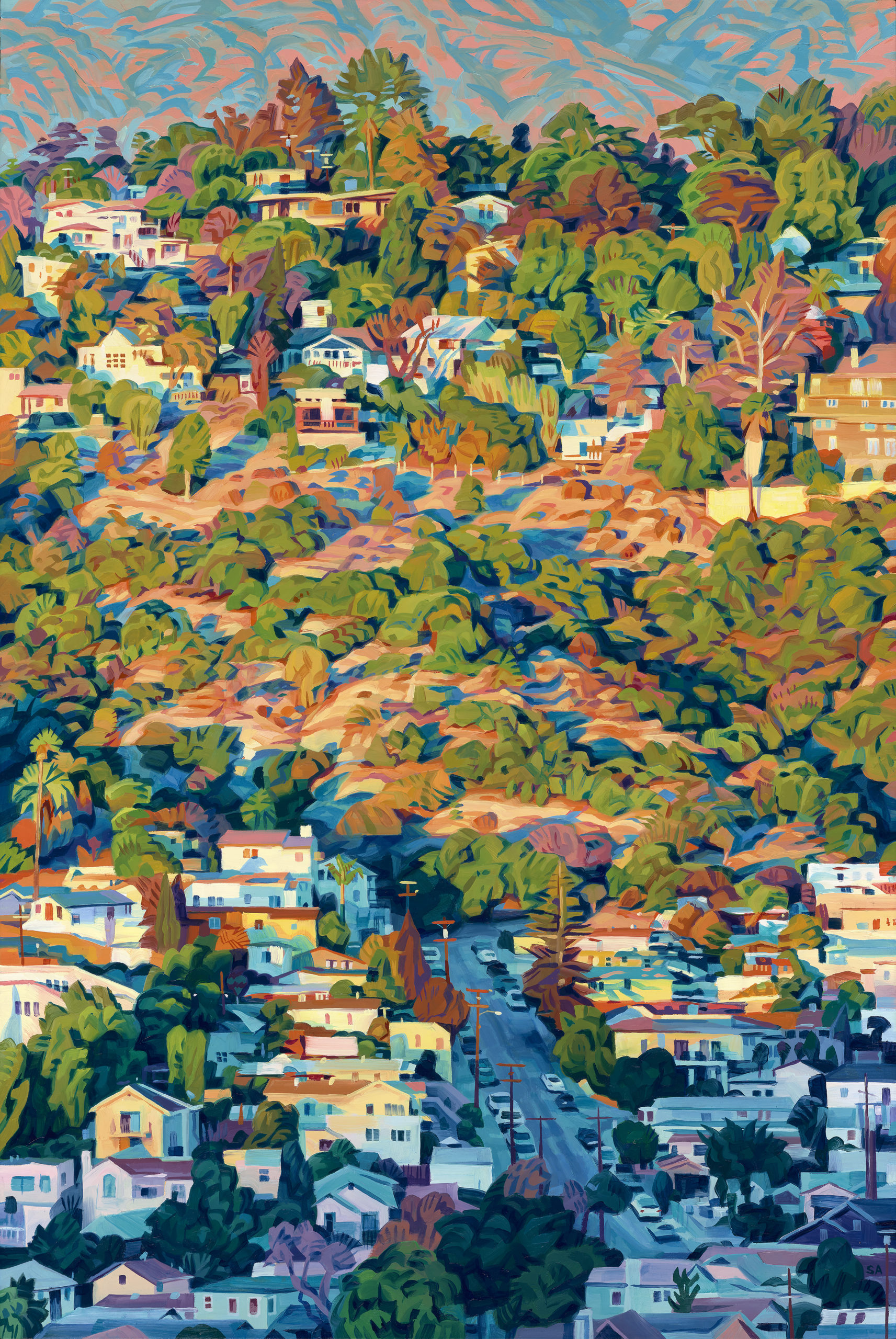 Seth Armstrong and The Impressionists

Seth Armstrong’s debut London solo exhibition Overlook is currently open at Unit London until 4th December. To celebrate the opening of this exciting exhibition we took a closer look at the artist’s practice.

Characterised by a harmonious colour palette and an interplay of light and shadow, Armstrong’s artistic practice has developed to focalise primarily on landscapes and cityscapes that depict his native Los Angeles. Capturing distinct experiences of light, Armstrong’s colour choices reflect how the city transforms at different times of the day. Drawing inspiration from the painterly approach of plein air painters, Armstrong embarks on various excursions to explore Los Angeles at dawn and dusk. Sometimes travelling no more than a few miles from his home, Armstrong camps out at different viewpoints to take hundreds of photographs of the same scene. From these photographs the artist either creates preliminary drawings or dives straight into painting, focusing on underpainting to plan his compositions that subsequently result in vivid and poignant canvas works. As such, Armstrong’s practice serves as a contemporary reinterpretation of a centuries-old approach.

Evocative of Impressionist masters, the colour palette Armstrong employs consists primarily of warm and earthy tones like golden ochre and olive green that are juxtaposed by varying cool shades of ocean blues. Exaggerating colour temperatures and playing on the contrast of cool and warm tones intensifies pigments in a way that is very reminiscent of Claude Monet’s sunrise and sunset compositions. In Impression, soleil levant, (1872) Claude Monet uses cool blue and violet hues to create a sense of depth and atmosphere, directing the viewer’s eye deeper into the work. In a similar way, Armstrong applies cooler tones to the shadows in order to create depth and variations in his compositions.

“Light and shadow are the most crucial elements of these paintings. As the heat of the day begins to cool off, and the energy of the city slowly dwindles there are subtle changes from moment to moment as the light crawls across the houses of the trees of the hillside surrounding my north-east Los Angeles neighbourhood. In a way, it’s kind of like Impressionism in that these paintings capture those fleeting moments that are intrinsically unique. Unique not only in themselves but also to LA.”

Continuously exploring themes that fascinate him, Armstrong explores the intrigue of illicit looking that is on the edge of erasing lines between trespass and intimacy. His cityscapes tap into the innately human urge to peer into the private lives of others in a process that borders on the voyeuristic. In their intimately private quality, Armstrong’s works have elicited favourable comparison to the compositional approach of Edgar Degas. While Degas was playing with voyeuristic depictions of bathers and young women in ballet class, Armstrong similarly paints through a veil a voyeuristic curiosity with an intent to discover how an image is observed, understood or experienced. Resonating with the universal desire to connect with others, even if from afar; these works employ the viewer’s natural curiosity and imagination to complete the narrative. Observing the protagonists who populate these cityscapes, the viewer is encouraged to consider the scenarios that accompany the shadows in the window frames.

Through his landscapes, Armstrong explores the limits of figuration, reflecting on artist’s who have challenged the status quo in the landscape genre; Monet, Cézanne, Matisse. Armstrong continues to push the boundary, playfully reinventing the norms in an energetic, vibrant, and rapidly evolving manner. Apart from emphasis on accurate depiction of light in its changing qualities and the intimate perspectives, similarly to the daring Impressionist movement, Armstrong’s practice transmits a desire to create works that reflect the world in which they are lived in. The ordinary subject matter is enhanced visually to create picturesque scenes that further highlight the false idealisation of the City of Angels, showcasing all that is often discounted and overlooked.