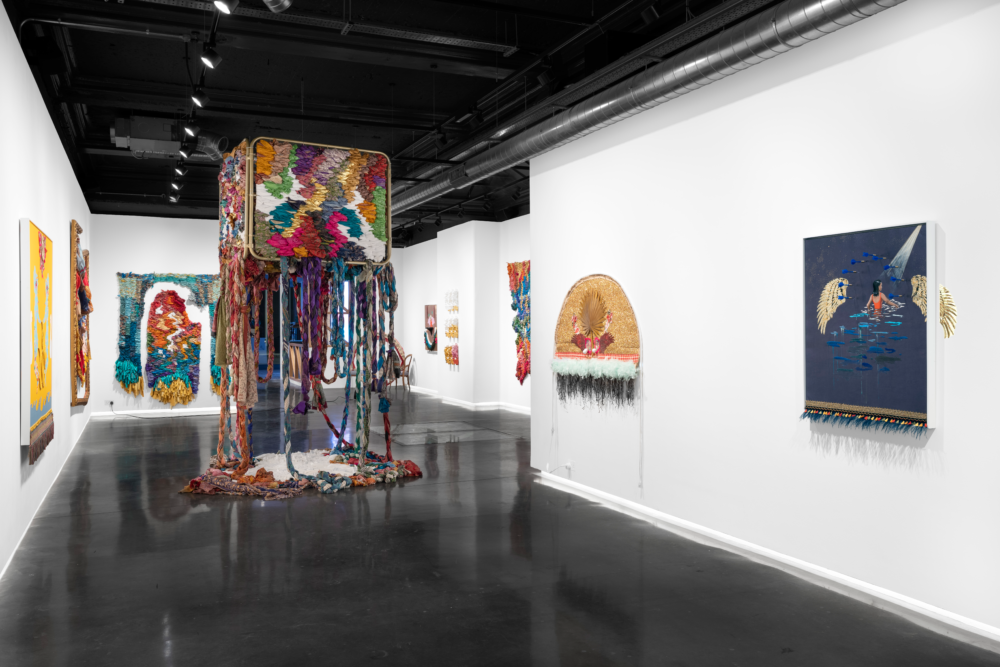 Make sure you don’t miss Suchitra Mattai’s first solo exhibition with Unit London, Monster. In order to explore Mattai’s diverse artistic practice, we took a closer look at some of her most important influences and inspirations.

Mattai’s artworks are immediately striking through their physicality, vivid use of colour and diverse texture. The artist is perhaps best known for her eclectic use of materials, bringing together different media to create harmonised pieces. Engaging with the vast tradition of craft, Mattai’s works incorporate needlepoints and interwoven fabrics. Therefore, it is perhaps unsurprising that Mattai has been greatly influenced by the Pattern and Decoration movement of the 1970s, an artistic endeavour that included crafts to widen our definition of art. With ties to the feminist art movement, the group sought to ascribe artistic status to traditionally feminine crafts linked to domestic spheres. Championing needlepoint, patterning, weaving and floral decoration, the movement strove to displace the male-centrism of modernism and contemporary art. Mattai’s artworks equally engage in this dismantling of hierarchies, questioning the prominence that fine art has held over craft and raising questions about the importance of public space (traditionally male space) over domestic space (traditionally female space).

Similarly, Mattai has been influenced by artists like Sheila Hicks, Shirin Neshat and Eva Hesse. In particular, the artist remembers viewing an exhibition by Hesse at the Tate. She felt profoundly moved by Hesse’s fluid use of material, admiring her ability to transform the meaning that a particular material conveys. Mattai’s works also displace preconceived notions of specific materials, challenging what we think we might know about certain media. In the same sense, the material presence of Hesse’s works might remind us of Suchitra’s monumental hanging pieces. The immense physicality of these installations deeply affects spatial relationships, transforming the experience of viewing.

In same vein, Mattai has been inspired by Mona Hatoum’s installation work, citing her piece, Remains of the Day, as a particular influence in how it engages with phenomenological experience. Equally, Hatoum’s works place emphasis on the body, even using the artist’s own body as subject. Mattai’s works are also bodily, featuring recognisable figures that navigate abstract and dreamlike scenery. In this way, both Hatoum and Mattai draw on dichotomy, merging subject matter from everyday life with broader more abstract societal issues. In the same way, Mattai cites the literary genre of magical realism as an influence with authors like Gabriel Garcia Marquez and Salman Rushdie having a profound impact on her work. Mattai relates to magical realism as her artwork equally occupies this liminal space between the physical and the abstract, between reality and fantasy.

When speaking of her influences and how these have evolved and will continue to evolve over time, Mattai states: “I think I have always been open to new ideas and ways of thinking and working. As a result, my practice seems to expand and contract taking breaths and cues from lived experiences.  For example, being a mother has transformed my practice into one that is more resilient, but also one that allows for more play and experiment.”

A cape of glass, a heart of gold

Acrylic, vintage saris, glass from the window in the artist’s studio that someone shattered, vintage bust and shelf, and fabric
13.97 cm x 16.51 cm

A world without secrets knows no pain