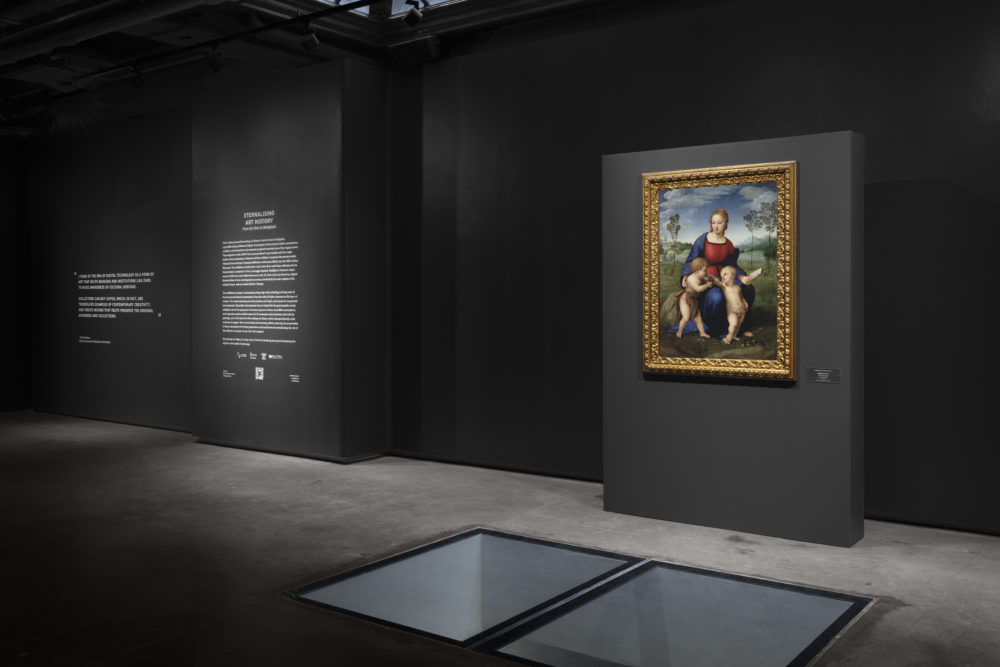 If you missed the panel talk at the gallery we invite you to watch an engaging discussion between art market journalist, Georgina Adam and speakers; Misan Harriman (Chair of Southbank Centre) Serena Tabacchi (Director & Co-founder of Museum of Contemporary Digital Art), Guido Guerzoni (professor of Cultural Management at Università Bocconi, Milan) and Carlo Francini (Head of UNESCO World Heritage Centre, Florence). Together they discuss the rapid evolution of digital art – its integration into the physical art world and what effects that will have on collectors, institutions, the art market and the environment.

GA: Serena, one of the things that we discussed when we were preparing this talk was the fact that with these digital reproductions you can curate an exhibition that would be impossible in the real…

ST: Yes, absolutely, and this is actually the case, like the room laid out as it is here couldn’t be possible otherwise, as I said before. These kinds of works, the reason why Cinello actually approached the museum is because, number one, we wanted to somehow take the artistic heritage beyond us, like within time those works will decay and with 1,000 years from now, I know it’s a long time to imagine, but, you know, digital can actually be transported. Like this is the best technology we have at present time, but in 100 years’ time, who knows whether holograms or other things we cannot even imagine right now will be possible. But if you do have a digital file, you can somehow transport it into something else, and it could live beyond us, whether the material will decay, and that’s something we know as a fact.

So the main purpose was to somehow protect the artistic heritage.

And secondly, of course it’s very important to mention that curators can have a lot of fun with these kinds of things because there’s also editions made for exhibition purposes that Cinello makes available.  That means museums will be able to take the DAW to the museums at the same time, let’s say you’re organising a show in Boston and one in Dubai with a retrospective of Leonardo and you could do so, and that way people will access the works, so in terms of accessibility, education, everything will be, yes, accessible in a way. So curators can have a lot of fun and museums can welcome more audience into their walls, you know, into physical museums, and at the same time supporting the museum that is actually hosting the original works with a revenue model that is very ethical and very much in support of the preservation of the original works.

GG: The museums for many, many years were not concerned with our environmental footprint and this is surprising because within this produced in an enormous amount of ways, just consider what’s happening during a temporary exhibition, which 90 per cent of the physical instalment is destroyed after the event.

So there is a number which always struck me, it’s the number of temporary trial exhibitions organised in China in 2018 so they lost 12,000 temporary exhibitions with international partners, so could you imagine the number of empty trucks or crates or boxes that later are destroyed? So a Cinello-like solution could reduce the environmental footprint, and this is not just because simply everyone today would… It’s important in order to redefine the social and ethical role of museums, so revising the conservation strategy, because even in July and August you have to guarantee 19 degrees or 50 per cent of humidity. So museums are on the verge of reconsidering their strategies, and in this regard this kind of production could really modify the perception and this impact.

CF: Sure, I totally agree. I remember… during the construction of the exhibition this incredible quantity of the old truck inside the historic centre, all the material and, sure, waste, a very, very large number of waste. I think it’s very interesting the idea of the possibility to have a masterpiece available for any exhibition in the world, and the possibility to create an alternative but without losing the aura of the original. Because this is a very, very interesting question, yes…

I don’t know if the aura of the original in our time is the same idea of… Yes, at the beginning of the last century, Walter Benjamin, the most famous art historian dedicated to the idea of the originality, maybe now we are totally involved in the digital experience. During the pandemic, I organised a large number of video connections dedicated to the masterpieces and the architecture in Florence, and normally, when I’m running a conference dedicated to the artists in Florence there might be ten, 15 people, 20 people, obviously not young men or young women, and on the digital occasion, 100, 200 people, many of these people are young. This, for me, is an opportunity for us to re-introduce the Old Masters to young people. I don’t know if it’s the right answer to your question about aura, but I don’t know if aura at this moment in our century, in our time, is the same.

GG: My answer is no, even like the advent of Spotify or Apple Music, our willingness to pay for live music, concerts, was not decreased, so we pay ten times what previous generations were used to paying for a live concert in the ‘70s and ‘80s, and I’m old enough to remember when the most expensive concert was £20 and not £100 up. So I presume that digitisation will not reduce the aura of the original, so…it requires new narrative, that’s it.

ST:  It’s like, if you stand from a metre or so from La Canestra, Caravaggio, you can’t spot the difference. Of course we all know that is not the original but it’s not sustainable to bring the original here or to make it travel, so we have to accept the fact that there are too many of us on this planet, we cannot all travel to Florence or have the luxury to travel to Florence, pay a ticket, visit a museum, but at the same time, we’re not going to miss out on Caravaggio’s paintings and learn more about what happened back then.

So I think this is a good way of still accessing art without missing out on the aura.

MH: Absolutely, and I dare say that in some instances it can enhance the aura. I was talking to…well, Joe, I was having a yip-yap with him and he was saying that one of the directors was saying that the reproduction is better than the original in terms of the shadow-play and the colours that were coming out in one of the pieces, and I was, like, oh, that’s quite a controversial thing, and he said, well, that’s from the top man in the museum. Accessibility of art and culture is what I live and die by, and we have to understand that many of us in this room grew up in a time where it was easier to experience culture in different cities. We are going to be travelling less and there’s a generation coming that so much of art and culture, whether they want it or not, is going to be digital. So how can we make that have as much high fidelity as possible?

If you blindfolded everyone in this room and didn’t tell them what we were doing, and particularly there, I’m not sure most people would presume it was a digital reproduction, it’s extraordinary and this is just the beginning of the technology, so it’s just going to get better and better, and it makes it borderless. Just think what you can do with schools, universities, that just we’ll be able to give children…which I think they’re not mentioned enough and it’s important that they understand the history of art in a way that marries technology, you know? The age of Fortnite and multiple metaverses and Roblox is their culture and what I always tell when I’m having board meetings regarding Southbank is that we mustn’t be so arrogant to think that they will come to us because we know how great the history of our art is. This is a new generation and we have to deliver the greatness in a way that they understand.