Mauro C. Martinez and Ed Ruscha: Text? Image? or Both?

Though text and imagery have been interconnected for centuries, it was when Surrealist artist René Magritte presented his Ceci n’est pas une pipe (This pipe isn’t a pipe) painting, that text assumed a more key role when it came to interpreting artwork. Mauro C. Martinez, an artist whose solo exhibition The Last Man is currently on view at our Mayfair gallery, often utilises text to document internet culture and to comment on our relationship with technology and the digital world. The artist juxtaposes common pictorial forms with the internet jargon that we, as an increasingly digital society, are so often subjected to. Skillfully utilising metaphor, irony and dark humour, Martinez’s paintings respond to the doctrines of internet culture, at once critiquing and mocking our relationship with contemporary imagery.

Text is not only used to complete the image but is a point of reference for Martinez, as the solo exhibition The Last Man takes its name from Friedrich Nietzsche’s parable, Thus Spoke Zarathustra. Martinez considers Nietzsche’s writing through a contemporary lens, presenting us with images of technology as beacons of positivity. Though many artists that use text in their work offer profound philosophical sentiments, Martinez plasters seemingly superficial phrases that in fact carry with them a complexity of narrative threads. One such work is Are Ya Winning Son (2022), reflecting on today’s prevalent digital shift and our increased dependence on technology. The text, the perfect accompaniment to the visuals, highlights how our society has normalised escapism, enabling and introducing these new online spaces in protest of modern institutions.

Similarly, the work Block Chain (2021), that reads; ‘Ok, who the fuck is Chain and why are y’all tryna block him?’, reflects on our migration towards the digital. For this piece Martinez uses minimal visual support, executing the figure in a simplified, cartoonish style, rejecting creative rigidity in favour of listening to the requirements of the image. Allowing his references to dictate the final outcome, Martinez is able to focus purely on methodology and capturing his unique painterly vocabulary. Whether as social commentary or just humorous phrases, text in Martinez’s practice is an aesthetic in itself, commanding the same consideration and substance.

Words with minimal visual support offer a different viewing experience, as the viewer is required to interpret language not only as text but also as an image. An artist who similarly employs text to deal with more conceptual concerns is Ed Ruscha, whose work will be featured in our upcoming group exhibition Sign Systems, opening on the 5th of July. Singular words and engaging phrases have been the focus of Ruscha’s practice throughout his six-decade career, featuring in his work as early as 1959 and transcending time through a variety of stylisations. What distinguishes his practice is his ability to stimulate and provoke reactions through his use of succinct phrases and images, identifying the raw elements of our human experience.

When contemplating the source of his narrative references, the artist commented, “Well, they just occur to me; sometimes people say them, and I write them down and then I paint them. Sometimes I use a dictionary.” Often the text in Ruscha’s work alludes to the popular culture of Los Angeles, while others hint at his childhood in rural Oklahoma. Similarly to Martinez, Ruscha’s work incorporates comical or satirical commentaries on life and modern society. Possessing a unique quality of being both remarkably precise and entirely elusive, Ruscha’s work often draws from popular logos and commercial brands. The carefully selected lexicon creates dynamic groupings that transform the compositions, contrasted by a subtle background. 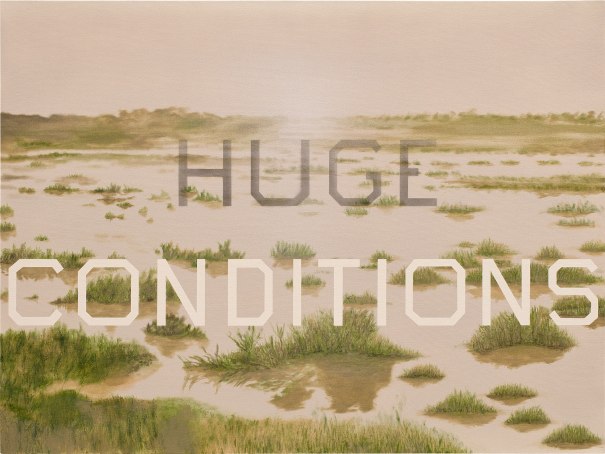 Rather than presenting the viewers with an intricate pictorial image, Martinez and Ruscha use text to entice them into a subjective contemplation. Through their work, the artists point to a world of visual overload and accelerating commodification, elevating consumer and meme imagery within the world of contemporary art. Often the textual element is seemingly illogical at first glance, with the de-contextualised image emphasising the works’ enigmatic quality. Ruscha in particular believes that when the source and the meaning are not entirely apparent, the text has the strongest effect. Capturing the artists’ wit and ability to synthesise a multitude of meanings, the power of their phrases is akin to exploring a marvellous historic city, where both gluttony and spectacular human achievement are exposed.