Kazuo Shiraga and the art of movement

Delve into the convergence of painting and performance...

The art of Kazuo Shiraga (白髪 一雄) is as much about performance as it is about painting. There is an undeniable energy in Shiraga’s abstract compositions, which puts process at the forefront of its aesthetic.

His gestural marks possess an intense materiality, almost acting as a metaphor for the Shiraga's exceptionally physical technique, a method utilising the artist's entire body to execute: "I want to paint as though rushing around a battlefield, exerting myself to collapse from exhaustion.'

Born in Amagasaki in 1924, he attended the Kyoto Municipal Special School of Painting in the late 1940s, studying the traditional nihonga style that defined Japanese visual culture since the imperial Meiji period at the turn of the twentieth-century. Inspired by the Abstract Expressionist movement in America in the 1950s, Shiraga founded the "Zero Kai" movement with three fellow artists before merging with the Gutai group in 1955. Gutai translates to ‘concreteness’, conveying the group’s principle of engaging physically with art using a range of techniques and materials, investigating the dialogue between action and matter. Total abstraction was its aim, rejecting traditional representation to put a core emphasis on the act of making and the conceptual profile of the work. The art was a radical celebration of individualism, a rebellion against Japan’s totalitarian regime during the Second World War.

One of Shiraga’s seminal works that defined the direction of Gutai was Challenge to the Mud of 1955, a ‘performance painting’ involving the artist flinging himself semi-naked into wet mud, sculpting the material with every inch of his body in dynamic and unpredictable movement. This wrestling was all grounded in the Japanese sumo tradition, though violently subverted and transformed as a solo theatrical performance, a struggle of man versus environment. Shiraga’s art is a constant negotiation of space, both in its making and its reception. Photographs of the artist at work are integral in understanding his works. Captured while swinging on ropes hung from the ceiling and brushing the canvas with paint-dipped feet, it is in these images that his method truly comes to light. Examining his paintings in light of this context lends a certain sensuality and tactility to the textures and forms, which become grounded in a profound sense of the artist’s character, creating unique and unrepeatable compositions.

Gutai, though initially ill-received, is now institutionally recognised as one of the most influential moments in modern art history, both in Japan and abroad, providing inspiration for movements such as Happenings, Fluxus, and Viennese Actionism. Today, Shiraga’s works are included in the numerous important collections such as the Hara Museum of Contemporary Art in Tokyo, the Dallas Museum of Art, and Gutai is internationally lauded today, featured in a survey show at the Guggenheim in New York in 2013 and at the 2009 Venice Biennale. Despite many of Shiraga’s works being over 60 years old, his unique take on abstraction is remains universally relevant, a spiritually and socially liberating activation of bodily capability and aesthetic transcendence. 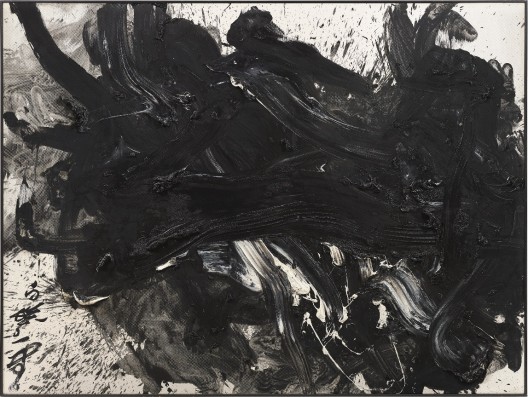